So, our movie for today is one that you probably havenâ€™t heard of, due to the fact that it is an indie movie, and it didnâ€™t have a wide theatrical release or very much, if any, advertising (there was an ad, but I never saw it). Taking the fact that it was an indie movie into account, you may expect it to be visually lacking, and probably a worse movie than a bigger produced movie. Actually, who am I kidding, youâ€™re defiantly thinking that an indie movie doesnâ€™t have as high production value than a non-indie movie, but itâ€™s not actually that noticeable while youâ€™re watching the movie.

The story follows Jeff, played by Kyle Davis, who is just an average, everyday guy, maybe a bit on the nerdy side, but he led a relatively average life with his friend Charlie, (Devin McGinn, and no, nobody in the movie has last names) who he shares an apartment with. But one day, when he Charlie arrive home, an old man informs them that Jeff holds the key to saving the world because he is the last descendent of H.P. Lovecraft. The reason that that matters is that, according to the movie, H.P. Lovecraft could stand things that other couldnâ€™t, including the creatureâ€™s telepathy, that drove other men insane, and it was in his bloodline, so Jeff is also immune to these creaturesâ€™ powers. Jeff is given an ancient artifact that holds the key to humanities survival, because if Cthulhuâ€™s minions get it, they can summon their master and destroy the world. Charlie explains the story of Cthulhu in an awesome animated segment that talks about how he got to earth, and how his minions affected ancient people.

This segment can be found here

This is probably my favorite scene in the entire movie, because this is the only time you could ever see a giant space god rip a titanic Tyrannosaurus Rex in half. But anyway, back to the plot. After Charlie tells the story of the rise and fall of Cthulhu, they are attacked by some of Cthulhu's minions, including my personal favorite: 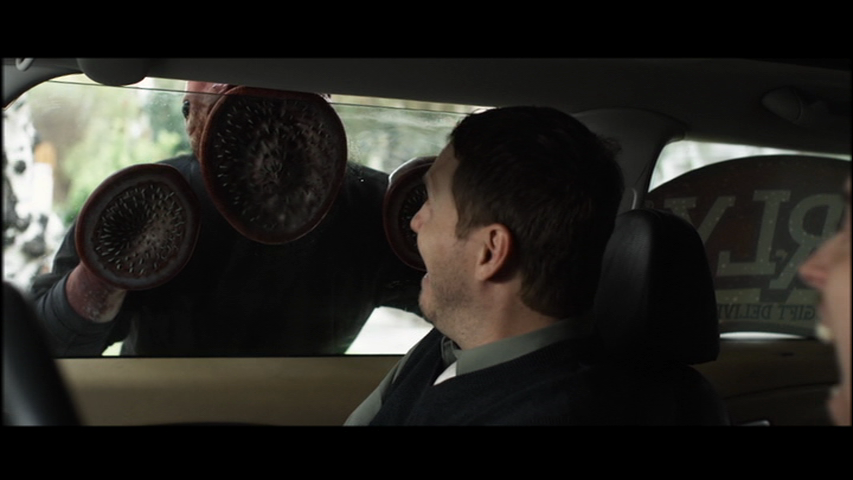 But it turns out that his minions suck (get it?), and they let our heroes get away. So they seek the help of a nerd that they, particularly Charlie, used to bully in high school, who randomly has a map to a guy who encountered Cthulhu's minions once and survived, so they naturally assume that that's a smart and safe plan, and decide to go to his house, which is in the middle of a desert.

While the plot is okay, it's pretty generic and could use some originality, but it works as it is. However, one thing that was lacking was the ending, and I'll try not to give too much away. In the end, they defeat Cthulhu's minions and stop Cthulhu from awakening and destroying the world. That much was pretty predictable from the start. Charlie, who had been planning to make a comic book, made his story into a comic book, and we see that it gained some popularity, as he was doing a book signing. He gets a call from Jeff, I think, and they go off to the mountains of Madness to stop the Elder Things.

That's all well and good, but it leaves something to be desired. First off, it's a cop out how they beat Cthulhu's minions. Second, the council members who supposedly gave them this new mission all died when Cthulhu's minions attack. And third, while Jeff may go on the occasional world saving mission, he still has the same, low-paying, dead-end job that he had at the beginning.

The special effects are another thing to mention, considering that it's an indie movie and all, but they aren't as bad as one might expect. Actually, allow me to re-phrase that. Some parts of them aren't as bad as you might expect. "The rise and fall of Cthulhu", for example, has great animation. But other parts of the movie look about as good as a Godzilla movie, and a bad one at that. Some of Cthulhu's minions are obviously people in rubber suits, and his main minion, Star Spawn, looks a lot like Red Skull from Captain America, but worse.

Would I recommend the movie to someone else? The short answer is no. While it has some funny parts and is entertaining enough to watch,it also has a lot of jokes that are just bad. Not bad as in inappropriate, although most of them are, but they're just not funny. Also, unless you know something about Cthulhu before going into the movie, I feel that you'll have no idea what's going on. The plot was generic at best, the ending wasn't fulfilling, and it was just an overall lacking movie