Welcome to an all new segment of The Philosophy of Nerdism. Despite what you may have thought when you clicked on this, there will be no actually depiction of a fight. Sorry, folks.

SHOWdown!!!! is where I will compare and contrast two 'shows'. By this, I'm referring to movies and television. With each entry I'll pick two movies, two TV shows, or perhaps one of each and I'll break them down and tell you which one is better.

I'll break down each competitor into five key elements. Whichever gains the upper hand in at least three categories wins! Today, I'll be focusing on the 'Big-G' himself: Godzilla!

Our first competitor was released in the States in 1954. Starring Raymond Burr and Takashi Shimura... give it up for Godzilla: King of the Monsters!

Our next competitor was released to U.S. home video in 1999. Starring Takehiro Murata and Naomi Nishida, here is Godzilla 2000! 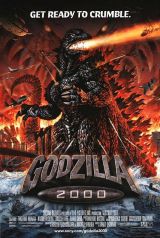 (Note: The following pieces may contain SPOILERS. Reader discretion is advised, especially for those who may not have seen these films.)

Godzilla films, and frankly, kaiju films in general, are known for being fairly campy. This is due to any number of things; poor dubbing, bad acting, dumb concept, heck, the film could just in general be a piece of crap.

Our first competitor, Godzilla: King of the Monsters, was released in the mid-fifties: a time many consider to be the birth of the science fiction film. Several great movies were released in that era, as well as several not-so-great movies. King of the Monsters, to me at least, is the former. The plot revolves mainly around a reporter (Raymond Burr) who is investigating reports of a giant monster attacking a small island. The monster (obviously Godzilla) ends up attacking Tokyo, Japan and the rest of the movie revolves around efforts to get rid of the monster. In retrospect, the plot actually bears quite a bit of resemblance to King Kong, but I feel like this is more coincidence than anything else. At the end of the film Dr. Kyohei Yamane (Takashi Shimura) lets himself die along with Godzilla at the hands of his own creation, the Oxygen Destroyer. This scene really gets to me. The film itself was, in typical fifties style, an allegory. It was a manifestation of the fear and angst still held by the Japanese people after the atomic bomb drops on Hiroshima and Nagasaki. The film moves slowly at times, at least for a fifties sci-fi movie, but overall, it's a good story and well-made.

In contrast, Godzilla 2000 makes itself out to be more of a modern b-movie. It focuses on the efforts of a scientist and his daughter who spend all their time chasing around Godzilla and the reporter who won't leave them alone. The plot is little more than, 'A giant rock is brought up from under the sea. The rock turns out to be a giant monster bent on conquering earth. Godzilla shows up and they have a big fight. Godzilla wins. The end.' Obviously, there's more to it than that, but most of the scenes involving humans could be edited out and you'd have the core plot. I like this film, but there's not much to it in terms of story.

ROUND ONE WINNER: Godzilla: King of the Monsters

This is a difficult category. I'm literally comparing Godzilla with Godzilla.

Honestly, there's not a whole lot of difference besides the fact that the Godzilla 2000 version is sleeker. From that standpoint, it could be argued that the newer version is better. Simply put, it looks better.

Here's the thing: Godzilla 2000's version may look better, but that's not the only thing I'm looking at. The way that Godzilla: King of the Monsters was shot is great for the same reason that movies like Jaws, Predator, and The Thing From Another World are great. You don't see the monster until it's too late. Granted, it's pretty hard to keep such a large creature hidden in the same way as some classic horror flicks. Nevertheless, it's pulled off nicely. In contrast, in Godzilla 2000, there's monster action every few minutes. The Big G is stomping around from the very beginning. There's not much horror in that.

Nevertheless, after much consideration, I can't help but give this to Godzilla 2000. Why? Unfortunately, King of the Monsters was made on a small budget (worse than American b-movies at the time). The old costume looks sloppy.

When you pick up a Godzilla flick, you're probably not expecting the acting to be superior. There are exceptions (namely GMK), but more often than not, you're not expecting Oscar-worthy acting.

These two films, surprisingly enough, hold their own pretty well in this category. King of the Monster stars Raymond Burr, known for his role as lawyer, Perry Mason. He was in his prime at the time and you can tell. He has a knack for making things dramatic, but in a good way. The whole film might have been dubbed, the acting is, well, believable. Godzilla 2000, doesn't necessarily fall short either. It was released in the U.S. for home video viewing, so the dubbing isn't exactly the highest quality, nonetheless it's done fairly well. Unfortunately, there's a few seriously cheesy bits. From what I understand, the distributor was having a conflict with Toho at the time, so some of the corniness might have been vengeful. King of the Monsters has some odd bits as well, but overall, it's well-acted.

ROUND THREE WINNER: Godzilla: King of the Monsters

When it comes right down to it, this is probably the motive most people have when they watch a Godzilla movie. Both of these films definitely deliver in terms of action.

Godzilla 2000, however, is very action-driven. There's very rarely a slow moment. In all honesty, it could almost be said that 2000 was made in more fifties-style sci-fi than King of the Monsters was. Everything is constantly moving. There's monster action from the beginning until the end, unlike King of the Monsters which required some buildup to it. It may not be as brainy as King of the Monsters, but in terms of raw action, it's pretty high up there.

Almost every film, even lousy ones have some sort of subtext. An underlying influence; perhaps what the film is trying to play off of. This is common in horror and sci-fi films. Fantastic, impossible storylines meant to play off of very real fear.

In Godzilla: King of the Monsters, the subtext is clear. It was meant to play off the fear of an atomic end of the world. In this film, Godzilla is born of atomic weapons testing. World War II was long over, but the scars remained. There's a lot of meaning to this film just under the surface. It's one part science-fiction, one part tragedy, one part disaster, and one part preaching. The world is faced with a threat that it created, but doesn't understand. The only way to kill Godzilla is to use the Oxygen Destroyer, a weapon deemed unbearably horrible by its own creator. This subtext might be a bit of a guilt trip for the U.S., but it still holds up nicely.

Godzilla: 2000 takes a little more dissection. The film was released in 1999. As we all know, that was a time of mild hysteria. The film subtly plays off of the fear of the Y2K scenario; in the film, the 'Mysterian' alien hacks into a system of computers to steal information about Godzilla. Playing off our dependence on technology is a common theme, especially in recent years. Unfortunately, this is a concept that is only briefly addressed in the film, and is fixed by blowing up the building where the computer is located. Suffice to say, there's not a whole lot of food for thought in this flick.

ROUND FIVE WINNER: Godzilla: King of the Monsters

Godzilla: King of the Monsters: 3

So that's it, folks. The original has taken this one. I like both movies, but in the end, you can't beat the classics.

Have two movies and/or TV shows you'd like to see compared? Leave a comment with your suggestion! If I like it, it just may end up here!