Welcome! This is Marvel's Corner!

Today I'm doing something that goes against everything good ol' Grandpa Marvel Man taught me about blogging. I'm spilling the beans. I'm letting it all hang out. I'm giving away all the tips and tricks.Â

So join me! Quickly! Soon my staff will realize that there is no lost puppy and come back to stop me. So act now!

Today's Topic: How to Start an EF Blog

Okay, I'm going to let you in on a secret. I know for certain that all the talented CBUBers follow Marvel's Corner. I aim my blog at the core problems of our time and provide deep up to date news. Also, I fill the blog with pictures of hot ladies and kittens.Â 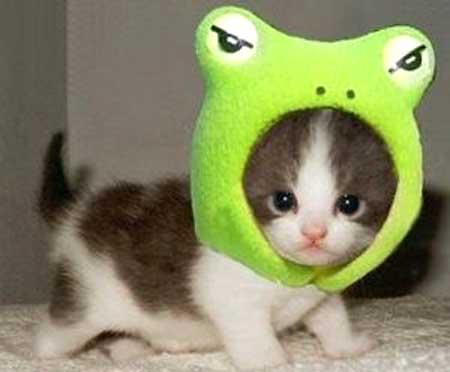 I was going to find a hot lady picture, but I spent three hours looking for this picture instead.Â

Anyways, the secret? It's about the future. The future of the EF. It ain't in the FPL or in the CBUB. It isn't the forum. Nah. The future...

So act now! Follow my patent pending process to start up your blog today!

Do you ever wonder how Shakespeare, Homer, or any of the great writers of old were able to be so successful? Its easy. It requires hard work, determination, and the ability to completely rip off any good idea you might encounter. Or at least, that's what Wikipedia told me.Â

Of course, this step is totally optional. I jumped into the blog game with no idea what I was getting into. I still don't know what the blog's about, so you don't have to either. Just go with the flow sometimes. However, the following step is very important.

In the real world, people tell you "location, location, location". And not only for obvious questions, like "Can you please say 'location' three times?" People say that word three times in real estate and in the business world, because location really does matter. Do you think Hummers sell well in Ethiopia? How many snuggies do you think Cuban people buy? Ever bought water in a bottle, when it's basically free from the tap?

Anyways, location doesn't really matter on the EF, so we say "Name, name, name". I mean, I don't know if other people say it, but I demand that my staff shout it once every hour.Â

Reader: Yo, Marvel Man, I'm not interested in hearing how you abuse your staff. What's so important about the name?

Ah, good question. The name is your brand. It's the first thing people see when they click on the EF Blogs. It's what people will say to one another if they ever talk about your blog. Just try to think about all the times you heard someone mention Marvel's Corner.Â

Yeah, I know. You probably hear about my blog everyday. No need to tell me.

â€¢ Â If your name is something really long with numbers at the end, think of another shorter name. I'm not bashing people's names, I'm just stating the obvious. Long ridiculous names aren't catchy. As everyone knows, catchy = success.Â

â€¢ Get creative. Once the EF audience reads this "How to", everyone will want to get into the blog game. Don't fall into the "Username's Blog" trap. Try something else. Maybe "Nova's Crib", "Soberguy's Canadian Blog", or "Watch Treacherous and the other Admins Torture CBUBers". All are good names.Â

People like them. They make your blog post look a lot bigger than it actually is. You can also use pictures to keep a post from becoming to wordy/lengthy. But most importantly, it gives you an excuse to look up pictures of kittens and/or hot ladies.Â

This might not be a concern for most blogs, but if you really want to stand out, you're gonna need some content. Looking through the EF Blogs, a lot don't have any posts in them, yet have tons of views. However, the truly followed, adored blogs will have content 99% of the time.Â

â€¢ Content is up completely up to you. Use your blog how you want. Day to day journal? Kinda girly, but ok. A way to record all the women you've dated? Really weird, but ok. A list of your favorite comic books? Perfect. Something happened in sports? Nice. New movie you want to review? Great.Â

â€¢ Content can be enhanced with pictures, but don't rely on them too much, unless they're really awesome.Â

â€¢ Top 10, Top 5, Top # lists are great and used by every blog out there. There are websites that literally, only post these lists. This means tons of competition, but the lists are easy to make and have an infinite number of subjects. Have fun making them.

That's basically all you need to know to make and run a blog. However, here comes the hard, dangerous parts. These are the things all bloggers need to watch out for. I've seen a lot of good blogs go down due to these. They're called, the THREE BLOGGING NIGHTMARES!

The first threat you face when you want to post a new blog post isn't too bad. It's just the end of time itself.Â

Yes! The end of time itself. You see, theÂ blog system that serge designed was meant to stop on December 31st, 2009. This is the date serge assumed to world would end. Although a genius, serge was also a bit superstitious. By adding up all the comics Marvel and DC post every year, then dividing the sum by the amount of times Jean Grey has died, and finally multiplying by the amount of times Superman has been attacked with kryptonite, you get 2009. To get the month and date, serge read the bible, the letter W's encyclopedia, and Peter David's Hulk run. I don't know the exact formula, but he got December 31st for some reason. On this date, an invasion from various alien lifeforms would take place. The only way to combat the aliens would be to a "Comic Book Universe Battle" writing competition. This is why serge originally created the CBUB. To save mankind. So keep writing on the CBUB. You'reÂ writing for the world.Â

How to beat it: As you probably know, the world didn't end in 2009. And if you didn't know, congrats! You lived past doomsday! Anyways, since this is the last date available to post. In order to maneuver around this, a blogger must take all 365 days from 2010, add whatever date he wants to post in 2011, then multiply by 24 (for every hour of each day). This huge number is then typed up on the time space, which can thankfully be changed.Â

And yes, you must do this calculation everytime you want to post. One day serge will return and fix this. And then we'll face the aliens.Â

This isn't as big of a deal as it is on the CBUB, but some people may still fall to this. As anyone who has written anything on the internet knows, you want someone to read what you just wrote. It's the whole point of writing it online. Otherwise, you could just keep a journal or something.Â

Having said that, you can't allow yourself to be discouraged by the lack of audience. The EF is a small site, so don't expect hundreds of instant views. Of course, sometimes the small size helps. Because the EF is so small, you have a better chance of getting people to read it, as opposed to starting a blog on some large blog-site where a new blog pops up every few minutes.Â

How to beat it: Don't be discouraged about the lack of early views. Keep at it and your blog will grow. Maybe it'll spread to other comic book sites? Then who knows...

This has affected everyone whenever they do anything everywhere since the beginning of time. It's man's greatest foe. It's why we aren't all ripped even though exercise is available to almost everyone. It's why people buy those "Go Green" shopping bags but never use them. It's why you hate doing chores. Just think what the world would be like if no one was ever lazy. We'd all be well read, have tons of muscles, and this blog post wouldn't have taken me as long as it did.Â

Anyways, the foe is laziness and his brother, procrastination. They must be overcome to do anything in life, and specially to run a constant, well kept blog.Â

How to beat it: Heh. No idea. Have you seen my blog? I update every few months. Laziness and procrastination beat me like a breakfast egg. I can hear them singing Michael Jackson's "Beat It" everyday. All I can tell you is to find the inner strength to write a blog post every once in a while. Lock yourself in a room with a computer and Internet connection once a month. That'll keep your blog healthy, right? I mean, what else would you use a computer for?Â

â€¢ Use the math formula provided.Â

â€¢ Use pictures, but remember that each blog post limits you to a certain number. I think it's ten. Maybe less. If you post more, the Admins will find you.Â

â€¢ Keep the updates constant. At least in the beginning. Later you can start to update twice a year.

â€¢ Hire a staff. Get information on all their close relatives and friends, then force them to work in harsh conditions. You got to break them before they stop complaining about working for a blog. Shut down that air conditioning and rip the "Hang in there" poster off the wall. Get them crappy Christmas presents, like snuggies, Nintendo Wiis, or HD DVDs. Later, you can demand a warm frapuccinoc a good DC comic, or something else that's hard to find. Â

â€¢ Don't take the blog too seriously. We all love to discuss politics, religion, and race, but this isn't the place for it. Unless your religion post is about how surprised you were to find out the Thing is jewish, I wouldn't post it. And yes, Fantastic Four's Thing is Jewish.Â

â€¢ Get a link to your blog and stick it on your signature. Unless you're already using some ridiculously large picture, no one will mind.Â

Anyways, that's it for today. Hope that helps someone. Until next time, this is Marvel Man, signing off.Â