15 replies to this topic

He's got prior experience with humans, but not with Nanosuits.

They are each aware that the other is hunting them, but other than that, have no information.

The battlefield is an overgrown abandoned City, they start 3 miles away from each other, roughly in the centre of the city. 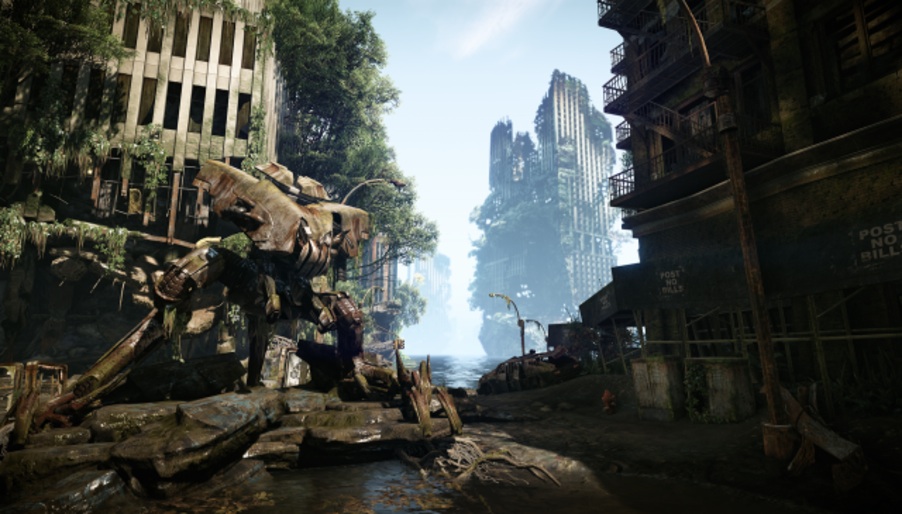 Who wins, and why?

Note, I don't care if a young-blooded warrior would have access to that particular level of armor, or those particular weapons, nor whether he would typically use them in a hunt.
For the purposes of this rumble, he's got access to the armor and weapons, and he's just as willing to use them as any other of his weapons for this hunt.
So please don't include anything about that in the comments.

Simply by judging what I've seen from both I would say Crysis has the edge here.

Playing the devils advocate here, to get some debate going.

Anything that Prophet does with his nano-suit, be it nano-vision to find the Predator, Cloak mode to hide from it, or Armor mode to tank the shots fired from it, will drain energy.
While the armor regenerates energy, it has a fairly limited storage, which could be a fairly fatal weakness.

The Predator on the other hand, apparently doesn't have that particular problem.

From what I've seen the Prophet seems much stronger than a Yautja.

Playing the devils advocate here, to get some debate going.

Anything that Prophet does with his nano-suit, be it nano-vision to find the Predator, Cloak mode to hide from it, or Armor mode to tank the shots fired from it, will drain energy.
While the armor regenerates energy, it has a fairly limited storage, which could be a fairly fatal weakness.

The Predator on the other hand, apparently doesn't have that particular problem.

While this is true, the nano suit puts Prophet pretty much on par with the Pred physically. When you add in all his heavy weaponry, and abilities. I think it gives him a slight edge. This would be a really close fight though.

Alright, after some research on Crysis and the weapons Kain posted, I think the Predator does win, even though he is physically < Prophet by a margin.

Firstly, while the EMP the K-Volt puts out would probably disable cloaking and the vision modes the Predator has, Predators already see in thermal, which can detect the true Prophet if he puts out a decoy (as Prophet or the nanosuit would put out at least some heat while a hologram/decoy would not).

Secondly, while the Grendel would indeed punch a hole in a Predator, it would have little success penetrating the armor (as Medium-Grade D-Lex is quite a bit more durable than a nanosuit's coverings).

A weapon the Predator can use if he can corner Prophet is the net gun, which would most definitely end the fight if Prophet can't get through it (as it contracts and bolts itself into the wall/other surface). A man in the first Alien vs Predator film broke his (assumedly steel) knife on it trying to get out while it contracted, which gives the Predator the edge in that particular scenario. The spear gun would probably have luck penetrating the nanosuit as well, though not on the coltan-titanium. The carboplatinum, on the other hand (I'm assuming this is the black part of the suit that takes the shape of muscles? Otherwise switch the two, as the wiki doesn't separate them with pictures) would probably be penetrated.

In all likelihood the grenades could win it for him if he cooks them for just the right amount of time and then throws them like a baseball at the Predator. They'd do damage to the mask, cloaking, and unarmored parts of the alien (the armor could tank it pretty easily), but blunt trauma could also get the Predator down long enough to kill with the Grendel.

The Predator Bow is interesting as a weapon to use against Predator, because while he could react to them/catch them given the chance, there are two types of arrows that would do serious damage to him if aimed in the right places (once more, the unarmored parts of him like the hands, arms, and thighs). The two arrow types are Super-Thermite and Airburst Fragmentation; Super-Thermite because of the piercing damage and then explosion (doing damage to the interior and exterior body and warrior mesh); and Airburst Fragmentation because of the splash damage it can do to the unarmored places.

I have to admit, Prophet has a good chance of winning, but only if he goes hand-to-hand (literal hand-to-hand, because the wristblades would probably screw him over) because he's stronger and probably swifter in combat than the Predator while he's in the nanosuit.

Now, on to the Predator's ways of winning.

I've addressed the net gun and spear gun as valid weapons (mostly the former in the situation I proposed), but now I'll do the wristblades.

They will probably be able to get through the carboplatinum if the blades goes along the divides (where the strands meet on the long edges) as well as the other parts with effort, but the Predator probably won't have time to drive through the coltan-titanium exoskeleton.

The plasma-caster will likely be able to do serious damage to Prophet because of the splash and impact/explosive damage. In the first movie it causes grenade-esque (probably due to the special effects at the time) explosions and in the more recent developments is an explosive fireball of sorts (ie exploding heads in AVP:R). As such, and as the soldiers can be killed in-game by similar explosions, I'll count it as a killing tool.

The combi-stick is kind of tricky, as it has multiple functions (whether as a throwing weapon as in AVP or as a melee weapon in the comics) and will decrease or increase lethality depending on the use of it in the fight.

In melee, it's a choice weapon capable of slashing and piercing attacks, and can be used in conjunction with Jehdin if I recall correctly, akin to a staff used by monks and the like. It won't have much trouble going through the carboplatinum as with the other weapons, assuming they're made of Medium-Grade D-Lex as well. It can score killing blows for the Predator easily even in a Young-Blood's hands (Young-Bloods, you must remember, are still about three and a half centuries old due to the Yautja aging process; ie 365 years is the equivalent of either 20 or 17, I don't recall the specific number) and would as such have about 21 times a number of years' worth in training (or 18 if 20 is the correct equivalent age), at minimum.

At a range it's quite a bit less effective as the nanosuit allows Prophet more speed than a Predator's base and would probably make him miss if he threw it. This, as such, lowers the lethality were it to hit.

This is my input on it, I'll be happy to respond to posts debating for Prophet or receiving of corrections.

EDIT: Prophet is a skilled soldier and the first user of the Nanosuit 1.0 as well as the only user of the 2.0, the latter he acquired through means either denoting his stealth or sheer power (meaning he either snuck in to get the suit or he killed everyone in his way to do it), both of which are feats to be reckoned with.

By the events of Crysis 3, he's been being augmented by Ceph technology for two decades, added onto his already impressive record as a soldier in the Army, where Basic Combat Training and Advanced Individual Training are mandatory and strenuous on the mind and body. Basic training includes stamina workouts, speed and endurance tests, obstacle courses, and combat training. The ways that the Army teaches you to kill is meant for humans, though (ie smashing the bone in your nose into your brain would probably not work on a Predator as it's intended to kill human targets).

However, his experience with other, more diverse aliens may help him here as he would know by Crysis 3 the tactics he needed to use against a certain type of alien (Ceph), yet I cannot be sure if any of these tactics would hurt the Predator any more than a different tactic, as I haven't played any of the Crysis games, merely investigated the links Kain has provided in as much detail as I could.

@Corvette: You've forgotten to include skills and experience.

@Corvette: You've forgotten to include skills and experience.

For Prophet? I'll edit it in tomorrow. Kindle is a pain to do much on besides small posts.

Where are you getting that Medium Dlex is more durable than the Nanosuit?

It can be safely assumed because the nanosuit is easily pierced by the gunfire in the game from the multiplayer I've seen, though this could be a game mechanic?

Yeah, it's game mechanics, but even if it's not, how do you know the guns aren't just extremely advanced? Do you have specs on their caliber, muzzle velocity, rate of fire etc.?

iirc wasn't there a cutscene/cinematic where the Nanosuit in Armor Mode or so had bullets bounce off from large caliber weaponry, the likes of those mounted atop combat jeeps?

They don't seem too advanced, I mean two of the three things you listed (the exclusion being muzzle velocity) is on the wiki link to the Grendel that Kain provided. Caliber: I don't know the conversion scale, but it says both 6.8x43mm and 6.8x45mm on the wiki for bullets, and the rate of fire is 500RPM.

Also Ethan, I have no clue lol. Go find it.

I found the video Ethan speaks of. 1:55 on you should see it.

EDIT: So large-caliber rounds would bounce off in Armor Mode, but this may not say something about regular, non-Armor Mode nanosuit. I'd have to find more cinematics.

Back to CBUB Unrated Rumbles

Also tagged with one or more of these keywords: Crysis, Predator