The Daughter of Galactus?

Marvel
Welcome one and all! This is Marvel's Corner!

Now, I normally don't report things that are happening right now. No. I actually wait a couple weeks. However, the news I have, begs, nay, DEMANDS that I report it. What is it?

Alright, let's take this from the top. I want all my readers to understand.

This is a Galactus:

The Big G is the top rung of the Marvel Universe (usually). He's from the Universe before ours, where he was just a regular chump (Named Galan). When his Universe was about to die, the little G plunged a spaceship into the "Big Crunch" (the place where the Universe was dying). Luckily, he lived. Emerging from the Big Bang, Galan was reborn as Galactus, Devourer of Worlds!

How'd he get that nickname?

Anyways, now that we've gone over that I can move on. Like I was saying, I don't usually keep up to date on comics (surprise), but recently I browsed Marvel's upcoming comic covers and spotted something amazing. I had to do some research on it, but now I'm certain.

You see, a few months ago, Marvel ran this contest where assistant editors could write stories and have them published. However, only one would continue. This was decided by an online poll, which, to my surprise, was won by Adam Warren. His story? 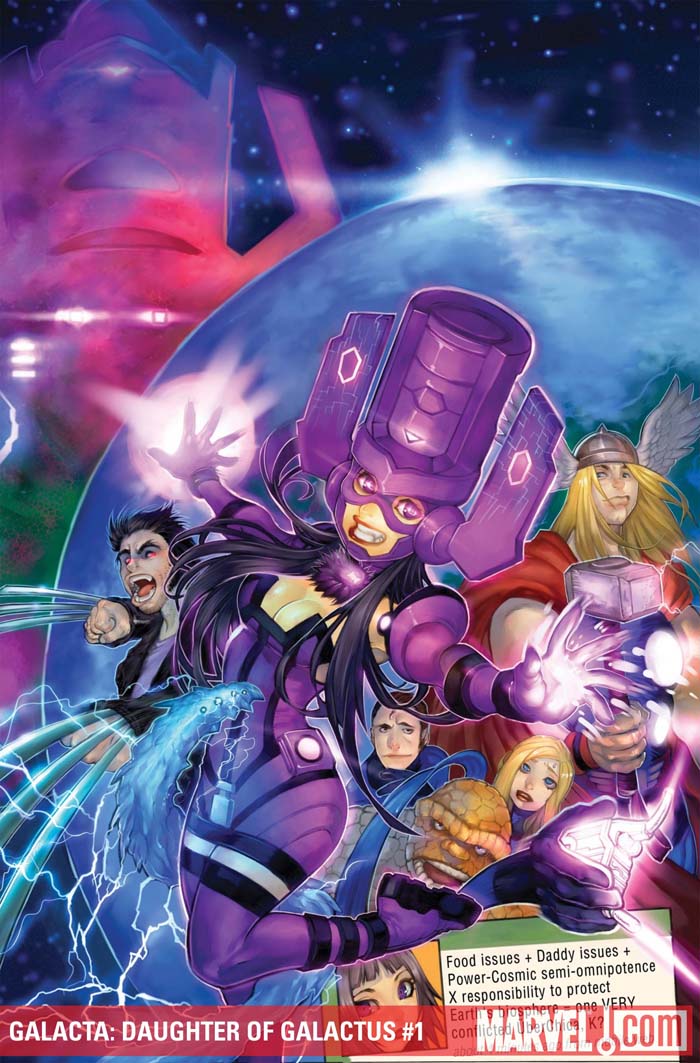 Yes. Let that sink in.

Anyways, I too, felt a mix of feelings. Digging deeper, I uncovered the following scans from her original comic.

Is it just me, or does this concept boggle the mind? Seriously, who's her mother? When did this happen (I'm gonna go with: A rough day, and a six pack.)?

I must buy this book! And you should too! Just check out the description:

Galactus is the terror of the universe, devouring planets and destroying civilizations as he goes—and a father to a growing
daughter! Meet GALI, daughter of the infamous planet-eater GALACTUS and the WINNER of last year's MARVEL ASSISTANT- SIZED SPECTACULAR poll! Unlike her father, Gali has formed an affection for the planet Earth, and does her best to subsist only on invasive alien life-forms…but when her cosmic hunger begins growing out of control, can she hold herself back from a deadly binge?

I just hope I can add her to the database...

Until later, this is Marvel Man, signing off.
Excelsior!