7 replies to this topic

Zack landed his helicopter on the Freedom Survivor ship with Eliot and Brad Wong on board.

“I hope Master Gen Fu is okay while we’re gone. I think he should have came with us,” said Eliot.

“He will be fine, Eliot. Besides, It was his choice to say behind,” said Wong.

Zack opened his helicopter doors. “We’re here gentlemen. Wolf, Tina and Bass Armstrong should be below deck. There is plenty of food if you’re hungry. I just need to round up a few more people and we will get down to business.”

“Let me show you around,” offered Kokoro. She turned her attention to Zack, “I’ll be right back.”

After a short time, Kokoro returned to the helicopter.

“Where to now, captain?” she asked.

“I was thinking about picking up Jann Lee. Apparently he’s making a movie out in California..” said Zack.

“That’s what I’ve heard. But, I’m not sure if I can convince him by myself,” Zack stated. “I think we will need to get Hitomi first to help with the persuasion.”

“Where is she at?” wondered Kokoro.

Zack started the helicopter engine and they elevated above the Freedom Survivor.

After a few moments of hesitation Kokoro asked, “Zack, is it just me or are you avoiding going to talk to Ryu Hayabusa and Hayate?”

Zack pretended to not to be able to hear her. “I’m sorry baby, I can’t hear you with the engine on.” 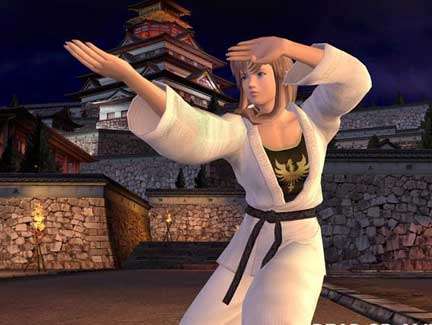 Zack and Kokoro walked through the large auditorium unable to locate Hitomi. Kokoro read through the karate tournament pamphlet. “I don’t see Hitomi’s name on here anywhere. Are you sure she is here?”

Confusion spread across Zack‘s face. “Tina told me Hitomi sent her an invitation to this thing.”

“That would only make sense if she were here. Tina doesn’t use karate,” Kokoro reasoned.

“That’s what I was thinking.” Zack grabbed the pamphlet. “Maybe she didn’t make the cut.”

“Hey guys!” called a voice in the distance.

Kokoro and Zack turned around to see a smiling Hitomi.

“What are you two doing here?” asked Hitomi.

“We’re here to recruit you. We need your help,” said Zack.

Kokoro pointed at the pamphlet. “Why aren’t you on here?”

“Oh, I’m not competing today. I just came to watch. I realized that I spend so much time fighting, that I don’t even get to enjoy watching karate anymore,” Hitomi explained. “But to be honest, I think I made a mistake. Watching it just makes me want to go out there and fight. There are some strong martial artists here that I would love to spare with.”

“Well according to Helena, there will be plenty of strong martial artists for you to fight once you come with us,” said Kokoro.

“Not exactly. I’ll explain it on the way,” said Zack.

“Oh no. I can’t leave now. The finals are about to start. I’ve been here all day, it would be such a disappointment to miss the end,” said Hitomi.

“It won’t be that long and then I promise I will go with you. You guys should come sit with me and watch. It’s a fascinating match up and it should be an excellent fight.”

Zack rolled his eyes and finally relented. “Why do I have the feeling this is going to be a constant problem with gathering everyone? You ladies need to find some hobbies outside of fighting."

Zack and Kokoro followed Hitomi to her seat and sat next to her. Hitomi filled Kokoro in on the two finals competitors.

“The girl on the left is Makoto. It has been so exciting watching her go today. She is a practitioner of Rindoukan Karate from a small dojo in the Tosa region of Japan. Kokoro, it’s been like watching a female version of the Karate Kid movie. Since she is from a small unknown dojo nobody gave her a chance to even get past the first round, but she has been blowing away the competition,” Hitomi announced with enthusiasm. “Although if she is Daniel Larusso that would make her opponent that kid from the Cobra Kai which doesn’t really fit. Sure, Yuri Sakazaki is a student of the famous Kyokugenryu Karate dojo, but that dojo is mostly famous because of her dad and brother, Ryo. She is something of an underdog herself, oh and so friendly. They are both strong young women with something to prove. What could be better than that?”

Kokoro tapped Zack on the shoulder. “When it’s done maybe we should ask the winner to come with us and Hitomi.”

Zack thought it over. “Sure, why not? Miss Douglas did say we could use all the help we can get.”

Makoto takes this after a decent fight. Makoto actually sought out and fought Ryu, doing well enough to put her dojo on the map. Yuri, on the other hand had this quote in her SNK wiki entry: " Since the rising skill of martial artists in the tournaments outclasses her basic training, Robert informs her of her brother and father's wishes to quit Karate for her own safety."

Another good set-up, Johnny. It will be interesting to see how this massive tournament goes once it gets underway.

As for the match, it looks like Zack, Kotoro, and Hitomi will be taking Makato with them. As mentioned, she seems more intense and experienced than Yuri.

Makoto is without a doubt the stronger fighter. And even though she's young, she takes her battles seriously. She'll be going with Zack and Hitomi (hopefully we'll see her again).

Leroy, since she won we will definitely be seeing Makoto again.

Dskillz, it won't be a tournament so much as a confrontation. Although the story itself is like a tournament in that only the winners will fight again. I'm a little conflicted because I want to include as many fighters as I can from these five game, but I don't want the gathering to drag on forever. I guess it helps that it is acting as a de facto 1st round.

Also tagged with one or more of these keywords: Makoto, Yuri Sakazaki, Fighting Game Crossover