Random
Welcome one and all! This is Marvel's Corner!

We are back! After a few months long turf war with some other blogs, a tornado strike on our HQ, and a battle over union rights with my staff, Marvel's Corner is back. Don't worry, I crushed my staff's spirit. Those socialists were draining me dry. "We have car payments to make... My kid can't drop out of school, she's only in fourth grade... Blah blah... You can't pay me with Marvel money, that stuff doesn't exist... I haven't eaten in days..." You want overtime, go to a DC blog. I'll just hire children.

People, I know you're all excited about this news, but please calm down. Some of you are probably shouting at your computer screens right now out of sheer anticipation. In fact, your excitement is so intense that it defies the laws of logic and common understanding of science by radiating throughout all time and space, so that, even now, I feel it; yes, even before I'm done writing this post I feel your excitement.

Twelve teams enter. Only one will emerge as America's Best Dance Crew! Wait, no, that's another competition. They do, however, earn the right to go to a pre-World Cup tournament where each continent's champion faces off. Typically Antarctica's Polar Bear team dominates that competition... Now, despite the fact that I'd love to cover every game, due to time constraints and my staff's need to sleep, I'm only gonna follow Team USA. 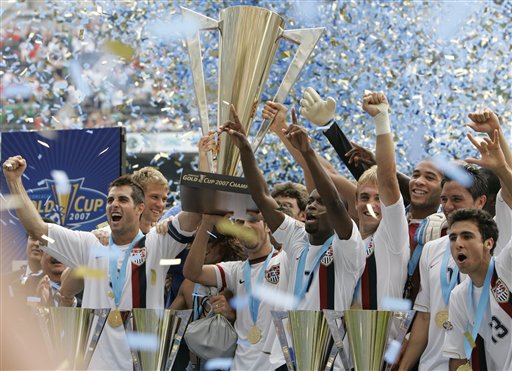 Now, I'm willing to do some sort of funny cyber-bet with anyone out there, that the USA Team will reach the final. Having won four Gold Cups (2nd most, Mexico has five), the USA Team is ready to bring it on tonight at 8 PM ET. This is a chance to start the tournament strong. They play their neighbors from the North, the capital of Hockey and homeland of Justin Bieber, Canada. Canada, although not known for soccer, has actually won the Gold Cup (back in 2000), so this will definitely be an intense match.

Having said that, the USA's greatest competition comes from the South, where longtime foe and capital of sombreros/spicy food, Mexico, awaits. The Mexican squad started out red hot, blowing out El Salvador with a 4-0 ownage Saturday.

For more info and other teams' schedules, check this link out: http://www.washingtonpost.com/sports/united/2011-gold-cup-at-a-glance/2011/06/06/AGQgNbKH_story.html

Well, that's it for today folks. I hope you have all enjoyed my grammatically incorrect soccer blog. If anyone wants the ten pages longer version of this post, filled with even more soccer, PM me.
Until next time, this Marvel Man, signing out.

MARVELNOTE: By the way, thanks to everyone who's been checking out the blog. Reached 9000 views the other day, which surprised me considering I haven't blogged since February. Thanks. MARV!!! I MISSED YOUR BLOGS MAN! DON'T EVER LEAVE US LIKE THAT AGAIN!

AH! I MISSED YOU GUYS TOO! And as long as you guys can stand it, these blogs will keep coming. Woo!