Marvel
Welcome one and all, this is Marvel's Corner!

Today we celebrate a very special occasion. We celebrate one of my favorite hero's birthday! And who is this hero? Well, if you haven't read the topic title yet, it is none other than the Merc with a Mouth, DEADPOOL! To truly celebrate, I dug into the Marvel archives and found his first appearance: New Mutants #98. 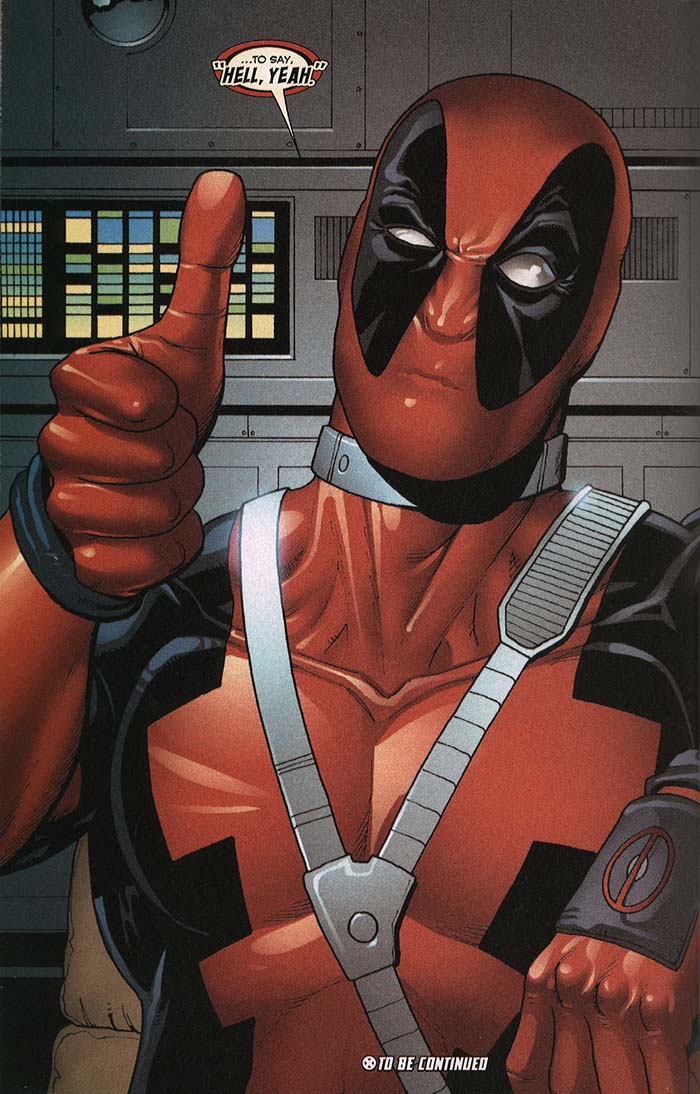 For those of you who don't know who Deadpool is, here's a quick summary:

Deadpool was once just a regular cancer stricken dude who volunteered for some weird Canadian program (which, I imagine, involved injecting him with Mapple syrup). For some odd reason, the Canadian FBI/CIA was also responsible for creating Wolverine, and in this experiment they decided to inject Wade with some of Wolverine's DNA/Substance. Due to Wolvie's healing factor and sheer badassery, this substance was succesful in saving Wade from cancer. On the negative side, his whole body was brutally scarred. He also ended up being tortured and experimented on many more times (His body survived only due to his insane healing factor. His mind however, did not make it. This whole thing made him the insane guy he is now). A few years later, Deadpool emerged with his new name (Wade Wilson) as the world's deadliest mercenary! And so began his adventures in the Marvel Universe!

But in reality, this month, on this day, 20 years ago, the world saw Deadpool for the first time. Created by Rob Liefeld and Fabian Nicieza, the character was somehow able to avoid Rob's power of terrible comics (he was bitten by a radioactive DC comic. BOOM! Take that DC!). Although a minor character in his first appearance, in twenty short years, Deadpool has moved onto to rival Wolverine, and Spider Man for "Being in the most comics a month" title.

Having said that, the character is definitely one of the staff's favorites. So once again, from the Marvel's Corner Staff and myself, Happy Birthday Deadpool!

And now for the highly anticipated review of New Mutants #98!

Alright, right off the bat, I can tell this will be a good comic. Look at the cover. You got three characters being introduced, while a bunch of other people gasp out of shock. Well, all of them except Cable, who looks kind of confused. On a seperate note, is Gideon a sumo wrestler or something? He's got the looks for it.

Okay, so first two pages have Gideon in some weird training room. Tons of robots show up, which of course, Gideo rips through. He is also talking to some guy named Adam.

He then flies down and talks to Adam, who looks like he's a young butler or something. They talk about some chick named Eve, and some guy who's name is really hard to spell.

The scene then shifts to Cable and Cannonball training in the Danger Room. Cable is acting pretty unheroically here, and even goes into a speech about how all life is war. Cannonball is clearly disturbed at how Cable talks about two other mutants who died (and honestly, who wouldn't? Cable doesn't even seem to care that two kids died under his command).

The scene shifts again, and we see Eve kill that really hard to spell guy's name. Her weapon of choice, poisoned coffee, of course! Only the really hardened assasins use coffee. It is, after all, a serious health hazard.

Anyways, the scene goes back to the X-Mansion (I think). There's some really bad art in these pages, so I really didn't pay much attention to the words. However, I did see Boom Boom (yes, that's her name), and Rictor talking. They then walk out and talk to Cable about something (weather?). Finally, things get real. Out of nowhere, Cable gets blasted! By whom?

Anyways, Deadpool and Cable talk some smack before they actually start throwing punches. Cannonball, Hispanic guy, Boom Boom, and Rictor all show up to watch history be made (Deadpool takes out Cannonball and Rictor with some weird cables). Seeing that his team of mutant kids is no match for a trained assassin, Cable finally decides to do something. He breaks Deadpool's jaw, to which Deadpool responds:

Yep. How he talked with a broken jaw, I don't know or care. But take that Cable! You know Deadpool could'be hit you in a different spot... That's mercy right there.

Anyways, three pages later and Deadpool goes down. He gets attacked from behind by Domino (sadly).

Despite expecting more Deadpool action, this is the last time he's mentioned in the comic:

Domino and Cable then talk about who they could recruit for their team. They run down a list of superpowered teens, but most are brainwashed by an evil organization, or captured by villains. Being the hero, Cable decides that they aren't worth rescuing and then plays Domino in Jenga (I assume). Meanwhile, Rictor leaves for somewhere, and the Hispanic dude is visited by Gideon in the middle! Gideon tells him that his Dad was killed by poisoned coffee. The comic then ends. I was in no way interested in continuing the Deadpool-less story...

Had it not been for Deadpool, this comic would have gotten two Stan's. With Deadpool, it gets three Stan's.

Anyways, that's it for today. Until next time, this is Marvel Man, signing off.
Excelsior!

Mar 14 2011 02:03 AM
I just realized why this entry is always at the top...YOU SOMEHOW MADE IT THIS ONE YEAR IN THE FUTURE AND SENT IT BACK IN TIME FOR US TO READ WHILE STILL KEEPING THE TIME AND DATE STAMP THE SAME!!!

Apr 27 2011 11:33 AM
Gideon was the closest thing to a decent character out of these three chumps. Deadpool is like Starbucks: It's cool unless you actually know something about coffee (comics) at which point it appears to be an incurable cancer that keeps showing up EVERYWHERE because idiots can't get enough. Then you're walking in school one day and you see this dude in a Deadpool T-Shirt that he bought at Hot Topic and all you can think is how most rabid Marvel fanboys have never even HEARD of Mark Gruenwald and you want to burn down a children's hospital.

Meanwhile, Rictor leaves for somewhere, and the Hispanic dude is visited by Gideon in the middle!

Middle of what??Anyways, I kind of agree. Deadpool's not an Alan Moore/"Contract with God" type comic. However, I know what I'm getting when I pick a Deadpool book up. Cheesy jokes, ridiculous action, and hot women. I'm okay with that sometimes. And I'll google that name...